I've recently open sourced a set of build scripts  for .NET development on Github to assist you in automating compilation, running tests, creating release artifacts and deploying those artifacts:


In this article I describe how to use them on your workstation, in your Continuous Integration/Delivery server and what parts still need a bit more attention.


What are the goals?


What does it automate for you?


The scripts are continuously improving, currently they do quite a lot:


Which actions are taken for what projects is automatically handled by sticking to the project naming conventions. More about these below.

Read on to learn how the build files are structured, how to use them and how to configure them in your favorite CI server.


The project has the following MSBuild files:


The first and third are the ones that continuously get improved so are best left untouched after you first start using them except for updating them to the newest version; the second and fourth allow you to override any defaults as defined in the other two files and have no need to be updated to the newest version.

The other scripts used from targets.msbuild are


If you inspect properties-convention-based.msbuild you can see that the directory structure as used in the repository is defined there and that the following conventions for project names are used:

For the location of your css and javascript within a Website project the following conventions are used:

Any of the conventions can be overridden, this is best done in the properties-repository-specific.msbuild file, so you can still easily update properties-convention-based.msbuild and targets.msbuild to the newest version.


To get this stuff on the road the following steps need to be taken:


I'll soon check which of these tools can be included in the repository without being in conflict with their license in order to avoid step 3 and further.

Deploying to Azure and deploying Data-Tier applications both use Powershell scripts. As these aren't signed they would normally be blocked for execution. To enable unsigned scripts to be executed start the Powershell and run the following command:


This does put your machine at risk, but it's currently the only way I know how to enable the execution of those scripts.


Okay, after all this work it is time to really get started. From a visual studio command line navigate to the /Build/Scripts/ directory and use the following commands.

To compile all solutions in the /Source/Csharp/ directory and subdirectories perform the following command:


To run all unit test projects:


To create release artifacts for all your projects in the /Build/Releases/ directory:


To run all integration test projects:


To deploy VS2010 database projects or Data-Tier Applications:


To deploy a website with MSDeploy to an IIS server:


To deploy an Azure web role or worker role:


Setting up a Continuous Delivery pipeline


A possible pipeline set up can look like the one pictured below. 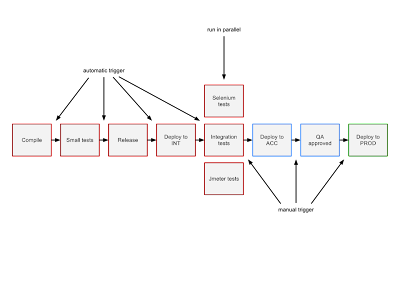 To implement this you would call the following targets and actions:

In Bamboo you have no such thing as a snapshot dependency, so in that case I save the whole working copy as an artifact in step 1 and have every following step import this artifact. From step 3 and further it also has a dependency on the Release artifact.

Where Teamcity and CruiseControl automatically pass their version numbers to the scripts in Bamboo you have to do this explicitly by adding the following parameter:

In ThoughtWorks Go you do this explicitly as well with either

or by setting the pipeline label to 1.0.0.${COUNT} and pass the following parameter

What needs to be improved?


Of course there are still a lot of improvements on the wish list:


Let me know if any parts of the setup are unclear so I can document them into more depth. I can also provide you with the /Build/Tools directory zipped up, until I've figured that out, license-wise.

Cheers, Jorrit
Posted by Unknown at 09:12

Email ThisBlogThis!Share to TwitterShare to FacebookShare to Pinterest
Labels: Programming